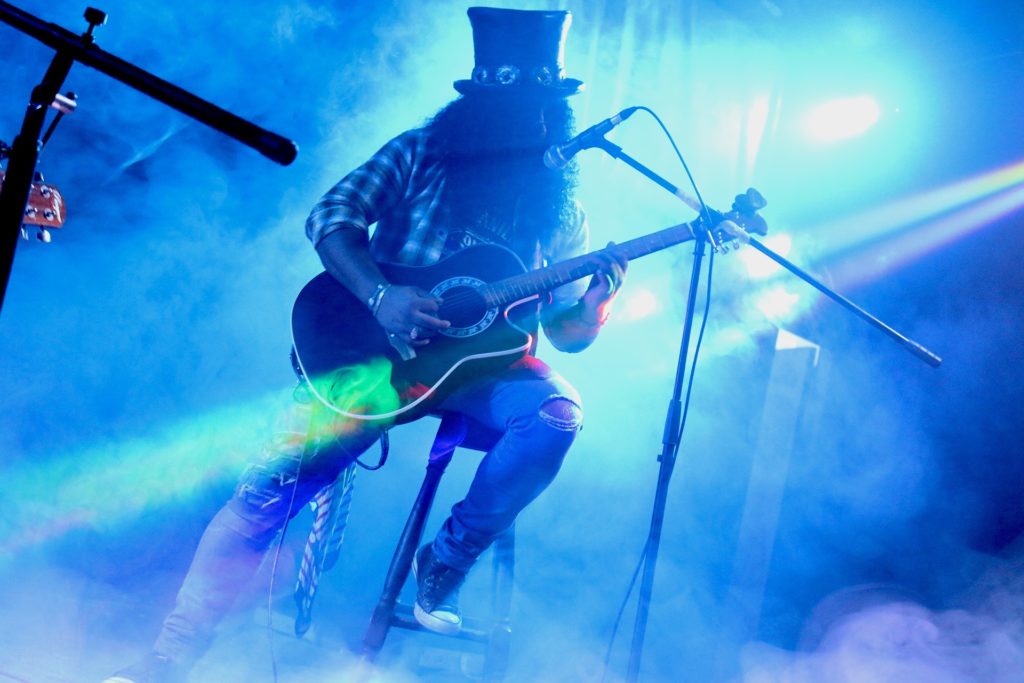 Some of the world’s greatest rockstars are no longer active. Some have even left this world ahead of us. But while these icons are gone, their music and legacy live on, even in the world of gambling.

With the help of the world’s top game developers, the best rock musicians in history have been immortalized in online slot games. There are too many rock-themed online slots in the market right now, but there are a few that stand out.

NetEnt’s Guns N’ Roses is the best rock online slot to play. This slot game won’t just give loyal fans of the American rock band an extra kick, but it is also guaranteed to appeal to every type of slot player on the internet. This five-reel, three-row online slot with 20 paylines has three great bonus features that will help increase your bankroll.

Frontman Axl Rose refused the Rock and Roll Hall of Fame honor, but I’m sure he won’t mind being the highest paying symbol on this game. Iconic guitarist Slash is next in line among 10 symbols that can be matched to make a payout on this online slot. Meanwhile, the “Appetite for Destruction” wild pays the highest possible combinations on the winning line.

British rock bank Motörhead re-energized the heavy metal scene in the late ’70s and the early ’80s with their hell-raising performances. NetEnt’s rock online slot named after it gives a fitting tribute to the greatness that the band achieved. Sadly, Lemmy left us in 2015. But his legacy lives everywhere, thanks to this video game.

With five reels of different sizes and 76 paylines, this online slot’s graphics are sleek and modern. The scatter is made up of the band’s famous “Snaggletooth” icon while the wild is an “Ace of Spades” which is a reference to the band’s greatest hit. Aside from the nostalgia, this online slot’s 96.98% RTP gives online casino players a very decent payout.

The Jimi Hendrix slot game is the third in NetEnt’s Rock Trilogy after the Guns N’ Roses and Motörhead slots. This five-reel, three-row, and 20-payline rock online slot is designed in colorful graphics using a ‘70s layout and is inspired by one of the greatest guitarists in history. It’s also one of the most influential musicians of the 20th century.

This slot jewel includes a peace sign, heart, LP record, an eye, and a flower. The list of symbols would not be complete without Jimi Hendrix himself. Hendrix is the wild symbol in the main game, and he can substitute for all symbols except the scatter. Aside from its peaceful ‘70s vibe, this online slot has no less than six features and an RTP of 96.9%.

The KISS slot game by WMS is a five-reel slot with 100 paylines. It’s the first online slot to have the Colossal reels, with two games of 5×4 reels and 5×12 reels. The interface of this game looks like a concert stage waiting for a band to perform. While the legendary band doesn’t perform live here, the game delivers as one of the best rock online slots.

This video slot features each of the band members in their different personas, and as a group, for the symbols in the game. The rock online slot’s high card values include a guitar pick and Gene Simmons’ signature tongue. KISS has many exciting bonus features including the “KISS Shout It Out Loud” feature which offers three types of bonuses.

As one of the ”Big Four” of American thrash metal, Megadeth sold over 30 million records since its inception in 1983. Then, in 2012, they collaborated with game developer Leander to come up with an online slot named after the band. The game has been a hit, just like the group.

The band’s members David Ellefson, Shawn Drover, and Chris Broderick act as the game’s main symbols while Vic Rattlehead is the Wild symbol. The band’s logo is the top paying symbol while the “free spins round” and the “pick me round” are the two distinct features of this medium volatility game.

Are You Getting Discounts in Your Life?